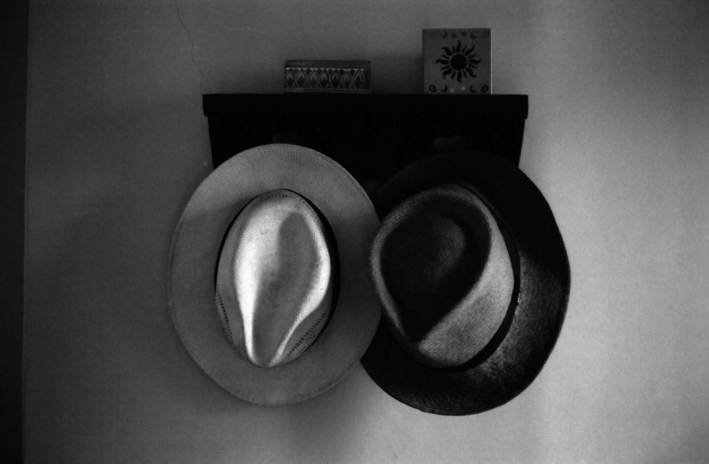 We get off to a bad start this morning when the running shower wakes him up, and as he passes me in the kitchen, an abrupt arm motion makes his frustrations noticeable. The door slams against the wall. I immediately feel like apologizing. Instead, I go downstairs to our neighborhood bakery for some fresh croissants and hope he’ll appreciate the gesture. Croissants are his thing. And I came to love them too.

I come back home and decide not to apologize. What would I be apologizing for? The shower? Or for reheating tea, which he finds disgusting? Or, better yet, for telling him the other day: “It’s a cute shirt, but did you know that’s a woman’s brand”?  Not today. I should save the words for when I really mean them and not because I fear his reaction, which, to my own surprise, I no longer do. As I rinse the cereal bowl, the kettle starts to whistle, and I let the house chores take over our silent confrontation. Every day, couples like ourselves perform a private pas de deux in their homes, hidden from an audience. Deprived of spectators, we let the little things take over.

The shower starts running in the bathroom, for the second time this morning, and I grimace at the teacups I’m placing in the cupboard, the only witnesses to this debauch. Their silence comforts me and I laugh to myself. I hear splashing sounds in the shower, and secretly hope there’s enough hot water in the boiler to avoid any more disagreements. I go back into the bedroom to make the bed and remember something he told me a few years before. “You’re the first thing on my mind when I wake up and the last one before I go to sleep, and yet you live in my dreams”. He said this to me over the phone, overseas, back when I wasn’t the first and last thing he saw, lying next to him, day in, day out. Our dreams, at the time, most often than not, revolved around being in the same time zone.

The shower stops and the curtains are bashed aside before the phone rings.

-– Hello, Joanna. He’s in the shower, but I’ll let him know you called.

I hang up and pack away my laptop and sweater. I’m setting aside both our train tickets when he shouts from the bathroom.

-– Your mom. You should call her, I yell back, loudly yet calmly.

I remind myself that today I choose peace. It’s just past 8am and the sunbeam that usually comes in late in the morning to land on our kitchen table is already dancing over the chair, a nice warmth next to the tablecloth. Summer is here. Fresh croissants decorate the table by the fruit basket and a hot cup of tea still awaits his recognition and approval. My face denies it, but my heart… well, it used to long for it. His hair dripping from the shower, he walks back into the kitchen, phone in his hands and dialing the number. I nod, signaling the teacup. It’s the first time he glances at me this morning.

He stirs his tea as I toss out the salad that’s starting to stink the fridge.

-– Ok, I’ll call you later this week, he ends the conversation, before hanging up and walking out of the kitchen.

Two hours after the phone call, we’re onboard the morning train south. As the guy with the vending cart walks by announcing plastic-tasting sandwiches, I realize I’m napping, the right side of my face leaning against the window. The music I was listening to through my headphones has ended without my consent. I look up to see him typing away on his phone, apparently unaware of my dozing off and reawakening. Some other day and I would’ve just seen unawareness, but today I admit it’s indifference.

Sitting across from him, I remember the first time I realized our love was withering. We were also on the train. The memory assaults me and stirs emotions I feel like spilling out, so I pull out a notebook and start scribbling, alternating between melancholy, euphoria, anger, guilt, regret, and hope. I put on my headphones, turn the music back on and let an 80’s pop song take me elsewhere. A place where I feel beautiful and confident and strong. It’s a mindset in which I no longer care about all of this.

The ticket controller comes by our seat and makes a gist about handwriting – me – and typing – him. Something about men and women. Looking away from his phone to the controller, he seems partly amused, partly annoyed, and thus smiles politely to avoid further speculations on genre differentiation based on the use of a pen or digits. We avoid eye contact for the remainder of the trip. The pretending is too real, though: either his mind is indeed elsewhere, or he’s fascinated by doorknobs. As he sits there, wishing to go by unnoticed, I decide not to insist. Not anymore. I’ve long wanted to believe there are alternatives to separation, the non-resolution, dividing books and records, dreams and friends, sleeping alone. I used to think I needed this, but I’m letting go.

The train signals the arrival and it snaps me back from my bubble of silence and self-consciousness. Loss is not an explosion; it’s a whisper. It’s not sudden; it lingers. It’s grieving for the living. I feel myself accepting grief, and the pain gently starts to lose its grip on me.

We come to a stop. I close my notebook and put it away in my bag. We step out of the train; the station clock shows 12h03 on the platform and he carries on pretending.